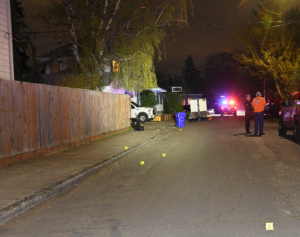 On Monday, April 6, 2020 at 6:58 p.m., PPB East Precinct officers responded to the intersection of Southeast Boise Street and Southeast 66th Avenue on reports of community members hearing sounds of gunfire. Officers arrived and located evidence of a shooting, including damage to two occupied residences and a vehicle. PPB's Gun Violence Reduction Team (GVRT) arrived at the location and presumed the investigation. There were no reported known injuries related to this shooting. (PHOTO)

Investigators were able to develop information about a vehicle involved in the shooting, which was described as a Gold Nissan Maxima. Further leads were developed based upon the information gathered which led to follow-up actions by GVRT on Wednesday.

On Tuesday, April 7, 2020, Portland Police Bureau members with the GVRT were conducting follow-up on the shooting from the day prior and performed a traffic stop in the Richmond Neighborhood on the gold Nissan Maxima believed to be the shooter vehicle from the shooting from the day prior. Several occupants of the vehicle fled on foot, and were later apprehended (See full release below for further details).

Officers located ammunition in the vehicle and a bullet graze on the vehicle that appeared to have previously come from one of the vehicle's occupants. This was also the vehicle identified as having been involved in the shooting the day before. Due to all of these factors, it was believed there was a likelihood those connected with the vehicle could be armed and dangerous, which prompted a neighborhood lock down and block search by the PPB Special Enforcement Reaction Team (SRT) and K9 teams.

Six persons were apprehended after an hours-long block search and their identities were verified. Three of those apprehended were identified and released. Investigators are looking into whether or not they are connected with any open investigations.

Officers are still asking the public to notify non-emergency dispatch if they were within the perimeter and locate suspicious items that do not belong to them. Dispatch can be called at (503) 823-3333.

19 year-old Rico Cabrera was charged with Interfering with a Police Officer and booked into the Multnomah County Detention Center as well. (No photo available)

Another vehicle occupant, was identified as 20 year-old Johnathan Miranda-Jimenez. He was turned over to Marion County Deputies related to a shooting investigation in their jurisdiction, for which he was charged criminally. Refer to Marion County Sheriff's Office for further details.
GVRT Detectives continue to look into the shooting from Monday and are coordinating with the Multnomah County District Attorney's Office. Further charges are under consideration.

"Through close coordination of Portland Police Bureau's Special Emergency Reaction Team, Crisis Negotiation Team, patrol officers, K-9 team, Air Support Unit and GVRT members, this potentially volatile situation was peacefully resolved," said Assistant Chief Andy Shearer. "SERT's highly trained officers working in direct support of patrol and violent crimes investigations results in positive outcomes that keep all of our community and our officers safe. We are grateful to our members and those in the community who stayed indoors while we safely captured those involved."
The Gun Violence Reduction Team continues to interdict gun violence citywide.

Anyone with information about gun crimes in the City of Portland is encouraged to provide information to the Portland Police Bureau's Tactical Operations Division at 503-823-4106 or email information to GVRT@portlandoregon.gov

Information learned from social media sites such as Facebook, Twitter or YouTube should be shared with investigators as these tips may lead to the identification of a suspect or suspects.

Tips on gun crimes can be emailed to GVRT@portlandoregon.gov

Crime Stoppers of Oregon is offering a minimum $250 cash reward to anyone who reports a convicted felon or a juvenile in possession of a firearm and tipsters can remain anonymous.

The Public Information Officer created a video version of this release and media is authorized to use any of the content for their coverage. The video can be found here: https://www.youtube.com/watch?v=267JqjoSr_8

Members of the Special Emergency Reaction Team and K9 Unit successfully apprehended the two suspects within the perimeter. The suspects were located and safely arrested without force being used.

Officers remained in the area conducting a search for potential evidence, but opened the perimeter up to traffic.

Investigators are requesting for community members with property within the area of the perimeter to notify dispatch if they locate any items that do not belong to them. Call (503)823-3333.

PPB members are grateful to the community members for their cooperation and patience while this search was on-going.

The identities and charges are not available for release at this time. The PIO anticipates sending an updated release tomorrow with relevant information.

For media who may have been unable to attend the PIO briefing, there is video on Twitter @PortlandPolice that you have permission to use.

The search continues for two subjects in the Richmond Neighborhood.

Members of the Gun Violence Reduction Team were conducting follow-up related to a shooting that happened on April 6, 2020, and attempted to stop a vehicle occupied with six individuals. The vehicle fled, but the officers were able to locate it near the 3200 block of Southeast Tibbetts Street.

Four of the vehicle occupants were apprehended. Two additional individuals fled into the neighborhood. Officers have information leading them to believe the subjects at large could be armed.

The subjects at large are identified as:
#1- Male Black, late teens to early 20's, 6' tall, light skinned, with a "mushroom" style hair cut (longer on top and flopping over and shorter on the sides), wearing a red sweatshirt and white shoes.

#2- Male Black (possibly mixed race), late teens to early 20's, light skinned, tall, thin, with longer hair covered with an Angels hat, bright red sweatshirt, and white shoes.
If anyone has information about these individuals or related to this incident that is critical, contact 9-1-1.

Officers are requesting those within the area of Southeast 31-36 Avenues from Woodward to Tibbetts to remain indoors while they conduct their search.

The Portland Police Bureau's K9 unit is assisting with the search. It is unknown at this time how long the search will take.

Media staging for this incident is in the parking lot of 3434 Southeast Division Street.

Lt. Jones is being briefed by on scene incident command. She will then brief media when able.

There is no ETA on that briefing or when an updated press release will be pushed out.

###UPDATE #1 BELOW###
The Special Emergency Reaction Team (SERT) and the Crisis Negotiation Team (CNT) are responding to the Richmond Neighborhood to assist with the search of the subjects who fled the traffic stop. There is reason to believe the subjects may be armed. PPB is requesting those in the area to remain in their homes and report any suspicious activity via 9-1-1.

The PIO is responding to the scene and will advise on media staging in an updated release.

On Wednesday, April 7, 2020, Portland Police Bureau members with the Gun Violence Reduction Team performed a vehicle stop in the area of Richmond Neighborhood.

Several occupants of the vehicle fled on foot. Some of the occupants were apprehended and detained. Officers are currently looking for subjects who fled into the nearby area.

Officers have set up a perimeter in the area of Southeast 31-35 Avenues and Tibbetts to Brooklyn. They are asking community members to remain indoors while they conduct their search. If anyone believes they have information related to this call, contact (503) 823-3333.

As more details become available about the underlying circumstances and updates, they will be released in an updated press release. 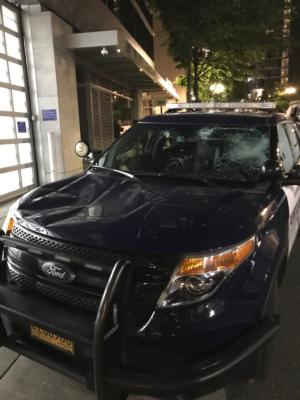 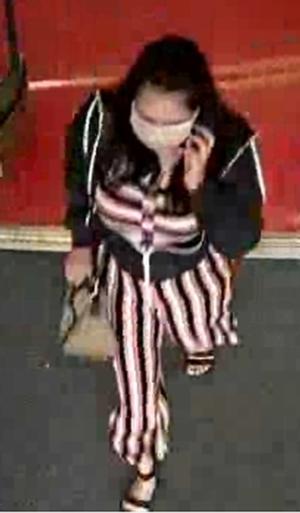 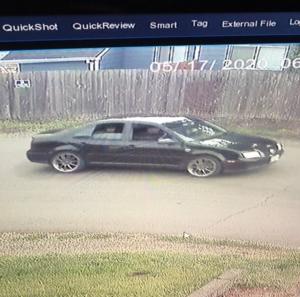